After the celebrations the hard work starts

Our team always gets a massive euphoric kick when we hear that we’ve become the carrier for a new customer. Such a decision is often preceded by months or more of hard work to even submit a proposal, so it’s really fantastic to hear that we can indeed start working for the new customer. This was exactly what happened when we won the tender for Agrifirm Hungary. Our team really got stuck in with this tender. In Hungary, the Feed Logistics division had already been providing transport services to various animal feed manufacturers for many years, and we really wanted to continue to grow in order to work even more efficiently. However, this goal doesn’t end with winning a tender; in fact, that’s when the party really starts for me.

We’ll be working for all three Agrifirm production sites in Hungary, deploying 15 new truck combinations and around 30 new drivers. However, these can’t simply be pulled from stock in the warehouse, so our plan had already examined whether we could transfer equipment from other countries. We’ve also placed orders immediately with Volvo Trucks and the trailer manufacturer for new equipment. Five new truck combinations will take to the roads in the colours of Agrifirm, and ten in the colours of Nijhof-Wassink. It’s true that the equipment was a challenge, but it was relatively easy to arrange thanks to cooperation with the operations managers from other countries. 30 new drivers, on the other hand, was a much bigger challenge.

Together with our HR department in the Netherlands, we started a Facebook campaign in the areas in Hungary where we needed drivers. We also turned to our own network, and placed newspaper ads. It was a major task to find and interview 30 new drivers. Besides, finding a driver is one thing; there’s no guarantee they’ll want to work with us. In addition to the recent, modern and well-maintained equipment that we had to offer, drivers could also choose from different working hours that were designed to both suit them and obviously guarantee 100% delivery to our customers. We’ve now managed to welcome these 30 new colleagues on board. The administrative structure already existed, so the only alteration was to assign more tasks to various people. For example, we now have to check the hours of 30 extra drivers, so that all the hours worked are paid correctly on time. There are also more people involved in scheduling drivers and equipment, and it’s important that Agrifirm’s systems are aligned with ours so that we can also cooperate at a digital level.

The first loads have already been transported, so; bring it on, we’re ready! 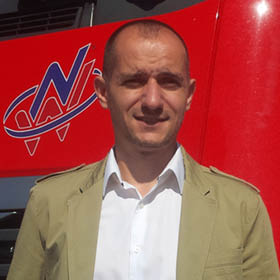 Do you want to stay informed about developments at Nijhof-Wassink? Then subscribe to our newsletter.